Concentration:  Afro-Caribbean Women of Post-Colonialism through Fashion and Film

Growing up in Saudi Arabia and all over the east coast, Zainab best describes herself as water because she can adapt and spill into any environment. At BMCC, Zainab majored in art history with the career goal of owning an art gallery that is representative of the African Diaspora. The GUIDE program was one of Zainab’s most memorable semesters at BMCC.  She met friends whom she now calls family. The GUIDE program cemented the importance of finding community. Zainab’s friends from the program helped with the entire college process from start to finish. GUIDE meant accessibility to academic spaces that she had only dreamt of. From the day she received the first acceptance email to the day that she became a GUIDE Scholar, this has been nothing but a dream for Zainab. 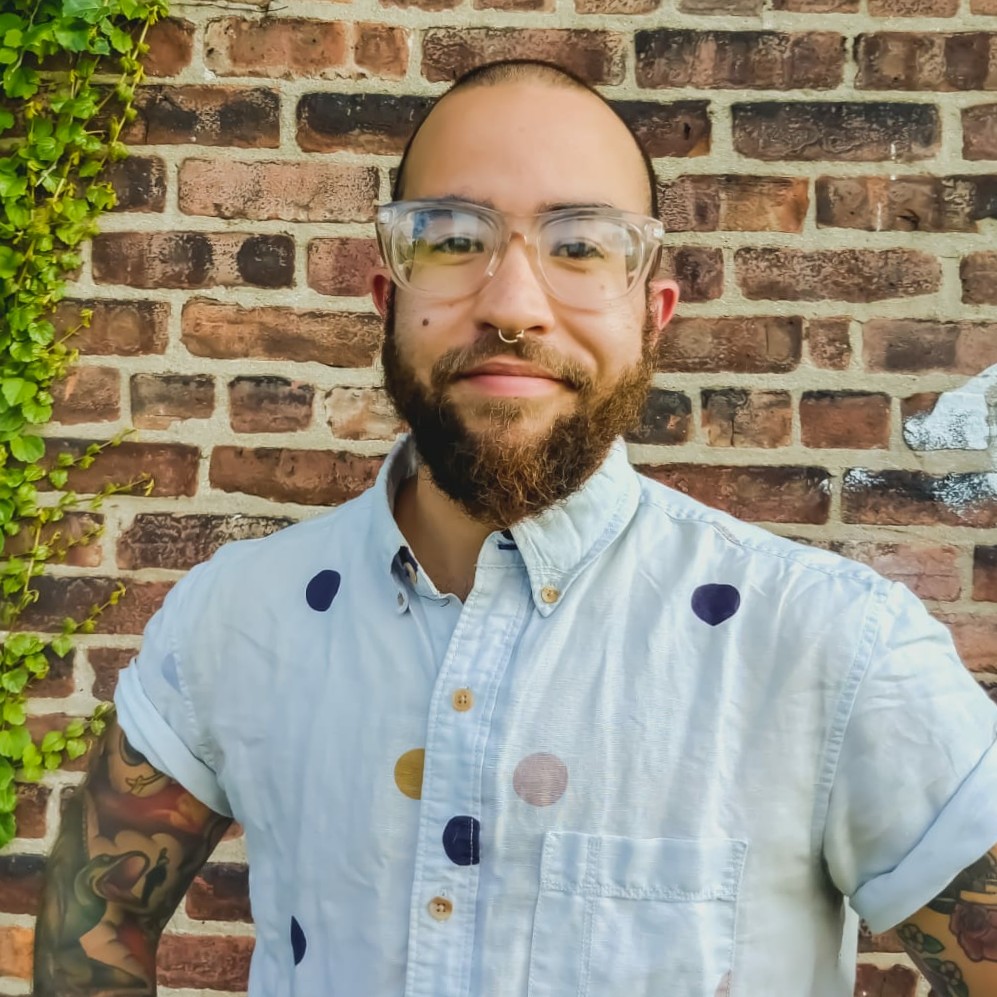 Owen, who hails from Boston, has lived in New York City for the better part of a decade and is a devoted resident of Queens. He originally envisioned developing a concentration based on issues of gerontology and body-based oppressions but changed his focus after his first interdisciplinary seminar. He remains deeply interested in aging but wants to focus on broader questions of worthiness and how people imagine the value of others. This has led to writing around themes of identity and separation, queerness, representation, and human "disposability." After a year at Gallatin, Owen's academic landscape is made up of classes in social and cultural analysis, ethics, wellness, and public policy. He intends to complete his first independent research project this Fall, entitled "Trans-as-waste: Transgender Subjects and Discard Studies." Outside of school, Owen is trained in addiction counseling and advocates for harm reduction measures in health spaces.

Jayshawn's academic concentration merges poetics, political economy and international human rights. His writing hopes to challenge the language that describes the future and current spaces we inhabit. His work and activism has been in collaboration with many institutions and organizations including How We Cope, NourishNYC, and his own poetry centered group— Write-Up.

Jahshana is a community builder, youth worker, and healing justice activist born and raised in Canarsie, Brooklyn. She is committed to facilitating healing and sustaining her community through ritual, plant medicine, and liberatory education. She works to create engaging, safe learning environments that empower youth. She currently works as a garden educator, tends to two community gardens in her neighborhood, and leads the healing justice initiative "Soil & Soul", which creates spaces for youth to reconnect with their spirit & the land around them.  A first generation American student, Jahshana is grateful that the GUIDE Program has given her the opportunity to be in a learning environment where she is free to develop and nurture her imagination.

Concentration: Dismantling a Democracy for Justice

Shaquasha Reynolds graduated from BMCC with a major in psychology in January of 2018. At Gallatin, she plans to continue studying social justice with a focus on mass incarceration in the United States and its intersections with mental health, family restoration, policing of minority neighborhoods, and rehabilitation. Through her Gallatin concentration, she strives to be a part of the transformational prison reform movement that seeks to dismantle the prison industrial complex and instead develop new ways of thinking and practicing justice that are centered around spaces to heal and reform. Shaquasha is very passionate about this movement as she has been affected personally by the mass-incarceration epidemic, with her own father imprisoned for numerous years. She has seen first-hand how the system devastated her family, failed her father, and continues to fail many other families and individuals around the U.S. Shaquasha is also a mother to a six-year-old little girl, has her own event planning business she runs from home and is an active youth leader within her church. She plans to be a part of the many organizations that contribute to the work of prison reform soon.

Concentration: The Black Aesthetics: Identity through Fashion and Photography

Born in the countryside of Jamaica, Remiesha was raised in a carefree, open, and vibrant atmosphere. With the homespun and rustic values instilled in her by her community, Remiesha immigrated to the concrete jungle of New York City at the tender age of 8. She is the fourth eldest of her 14 siblings. Growing up in a large family, Remiesha embarked on forging her own identity through fashion. She attended BMCC where she pursued her degree in the arts. It was at this institution where she became interested in social justice and its connections to photography, fashion, and ultimately one’s identity. In her free time, Remiesha likes to read, skate, and upcycle clothing; reinventing them into something new.

Cascia Thompson is a Jamaican-born aspiring writer/educator, and the owner of Lead By Example Environmental, an EPA-licensed environmental inspection company in Brooklyn, New York. She applied for the GUIDE Program with an agenda: to prove to herself that she was capable of being and achieving more than her life circumstances dictated. Her experience as a GUIDE Finalist if the Fall of 2017 helped her to see education through a lens that had not been tainted by other people’s assessments of her worth. By becoming a GUIDE Scholar, Cascia is now able to use the gift of education to pull herself up and achieve success.  What she gained from the experience was an understanding that everyone, in spite of their baggage, has the potential and the ability to rise above their designations, so long as they are willing to do the work.

Shaina’s childhood heavily consisted of books, performing arts, and writing as a means of navigating the world. The only child of two Honduran immigrants, Shaina has found that her academic interests consist of activism, Latinx Studies, entrepreneurship, and acting. At BMCC, she built a strong foundation in business, marketing, and literature while also pursuing extracurricular interests in Latinx Studies and the performing arts through non-profit volunteer work. At Gallatin, she plans to develop a holistic and interdisciplinary concentration that integrates these fields of interest by exploring media representations of Latinx communities within entertainment industries. As a GUIDE Scholar, Shaina looks forward to the opportunity to shape her own education to reflect who she is as a student, who she wants to become as a thinker, and what she wants to achieve as an engaged citizen.

Born and raised in Brooklyn, Kevin Zambrano, has been a lifelong resident of NYC. His interests range from feminism to continental philosophy to literary theory and linguistics.  At BMCC, he focused on building a strong foundation in philosophy, psychology, and literature. He also participated in various leadership programs and facilitated workshops on campus life and acted as a peer mentor. After participating in the GUIDE program as a finalist, Kevin became exposed to interdisciplinary studies where his eclectic interests could finally take shape. His studies were then devoted to finding the various connections between disciplines and how the methodologies of one might apply to another. At Gallatin, Kevin’s concentration is centered around the act of imagining and the various ways, if any, that literature and writing have on how we perceive the world and the sort of concepts we are capable of imagining.