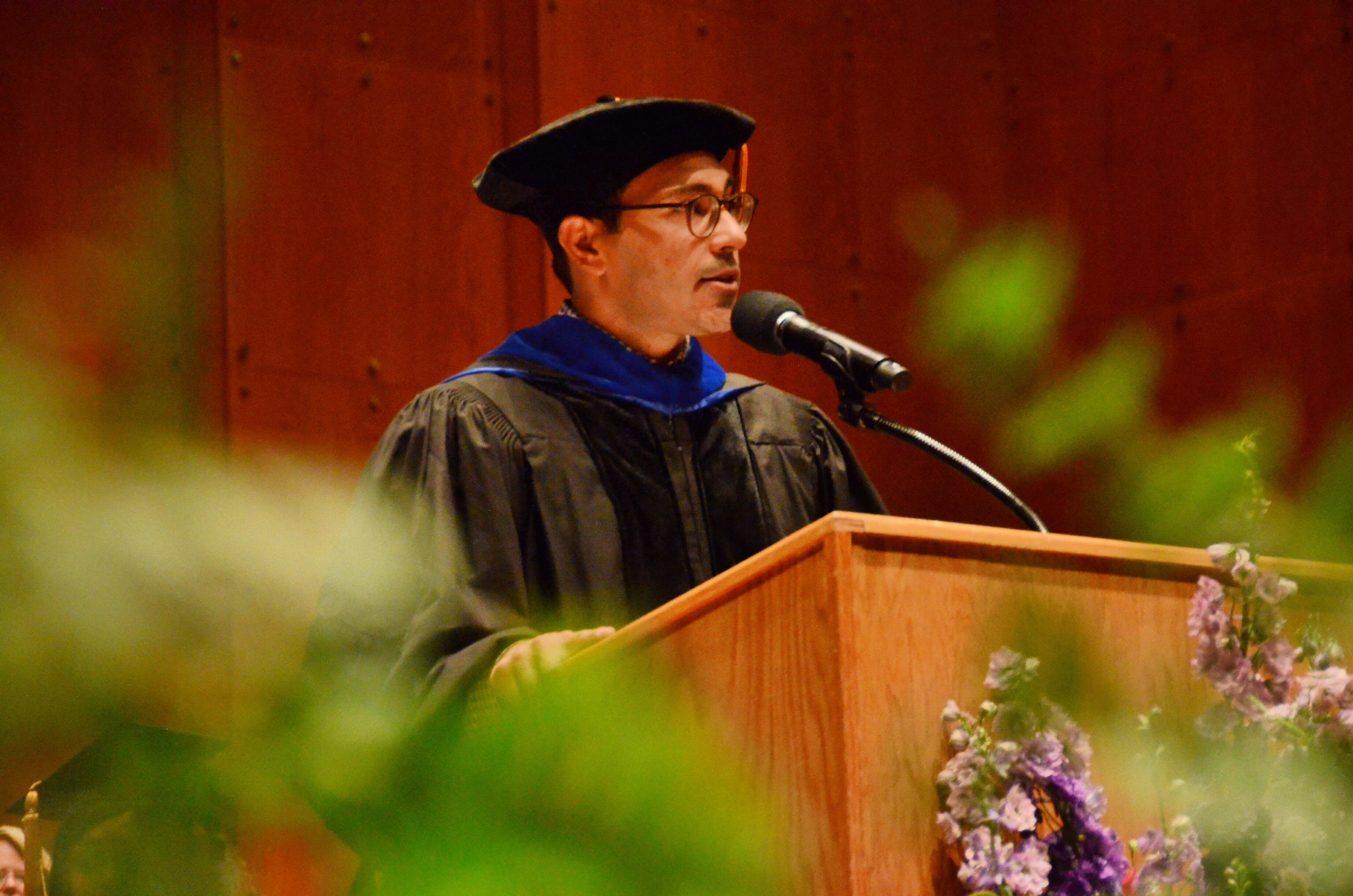 Thank you Dean Wofford, distinguished colleagues and guests, families and friends, and especially, the class of 2019—Congratulations! You made it. I am of course deeply grateful and honored for this opportunity to address you. Mostly though, and I’m not going to lie to you, I am . . . pretty terrified.

This is, after all, a legitimately intimidating place from which to be speaking and a legitimately intimidating occasion in which to be doing it. Plus, I confess that twenty years ago at my own college graduation, delivering a commencement speech at a place like Lincoln Center was high among the things I never thought I’d do. Let’s just say I was not an A student. I’m sure there’s a lesson in there somewhere, but I digress.

Mainly, I’m terrified because while today is—as it should be—a day of joy and celebration, a day to recognize a truly major accomplishment amid the love and smiles of dear ones, the fact is—and there’s no way to sugarcoat this—the world outside this place, the world beyond this moment, is a world deep in distress.

Of course you know this. You’ve lived it. In the past few years you’ve seen misogyny, white supremacy, and xenophobia embraced and promoted by elected officials at the highest level. You’ve seen migrant children detained, separated from their parents, and hauled to court as a form of quote unquote deterrence. You’ve seen black and trans and, increasingly, women’s lives come under heightened assault. You’ve seen the denial of climate change and basic science elevated to official state policy. Sadly, as you know, I could go on.

Now, the historian in me wants to tell you that it’s not as bad as all that, that history is filled with moments far worse. And that is certainly true. But as an historian I’m trained to look less at moments than at processes. And in that light, it is difficult not to see this moment not as a break from the norm but as the consummation of long mounting crises: our endless wars as the long shadow of US response to 9/11; fake news as a product of the lies that led the US into Iraq; the global explosion of inequality and populist rage as a result of our failure to hold anyone accountable after the financial crisis of 2008; and anti-immigrant fervor as an expression of currents that are not new or incidental but deeply woven into US history.

So it’s a bit terrifying to stand in this place on this occasion and say these things. Perhaps, like me, over the past few years you’ve felt overwhelmed and anxious and if so, let me say this as clearly as possible: that is entirely legitimate and right.

And yet . . . and yet, I hope what you’ve not felt is discouraged. Perhaps, like me, you’ve found other moments to temper your anxiety. Perhaps it’s been seeing incredibly brave black and brown and white coalitions literally bring down monuments to racism across the country, or incredibly brave women expose powerful sexual predators at enormous personal risk, or incredibly brave migrants trek thousands of miles to challenge walls real and imagined. These moments too stem from long histories of struggle for justice.

Moments like January 28, 2017. Do you remember that day? Perhaps you were there. It was just over a week after Inauguration day, many of us still reeling from the election, anticipating the worst. News had broken the day before of an executive order banning citizens from several majority Muslim countries from entering the US. The next morning and throughout that day, dozens then hundreds then thousands made their way to JFK, then to other airports nationwide; they went to reject the ban, to stand in solidarity with complete strangers. By nightfall, ACLU lawyers had filed for and won an emergency injunction stopping the ban, capping an exceptional day of mobilizing on different fronts.

For me, as an historian, as a social movements scholar, but mainly as a person in this world, I draw three lessons from that moment that have buoyed me in the years since.

The first is that rage absolutely matters. It keeps us hot and active and mobilized. It compels us to flock to JFK with only the certainty of indignation for a guide. Forget joy—it should spark fire in your belly that in the richest country on earth we choose to fund endless wars but not free college, that so many of those who inspired you in your classes are part-time faculty, that so many of you had trouble staying focused in class not because you were bored but because you were hungry.

Rage is what reminds us, as the great Fannie Lou Hamer said, that being sick and tired of injustice has its limits. It’s what warns us, as Tayari Jones does, that “There’s nothing virtuous about finding common ground” if it means compromising on justice. So when you hear calls for civility, tell them yes, there is a time and a place for that. But there are also times for rage. The wisdom comes in knowing the difference.

And so the second lesson I draw from that moment is that while rage matters, it’s not enough. That day ended in victory by combining rage in the streets with institutional pressure. It always baffles me when I hear a student say: I love the arts or writing or research but I’m going to law school because that’s where you can have an impact. Wrong. The struggle for justice is wherever you happen to be, in whatever place, in whatever discipline, in whatever profession. Social justice is social for a reason: it’s a collective project, it’s about adding strengths not splintering them. And what better place than Gallatin to realize the power of adding strengths?

Some of you will indeed become lawyers, and if so remember what you learned from Professors Nesiah and Madar: law is about power, not just justice; just because something is lawful does not make it just, and vice versa.

Some of you will become artists, and if so remember what Professors Malnig and Miller and Horton and Dinwiddie taught you: that art is and always has been political, whether on the dance floor or the theater stage—or the script.

Some of you will become scientists and if so, remember Professors Stanley and Anker and Cittadino’s classes, where you learned that while truth is constructed, facts matter and evidence and rigor should always be at the core of any truth claim.

Some of you will become journalists, and if so remember what Amira Hass and Raza Rumi said when they visited: that objectivity is a dangerous fiction if it means giving hate a platform.

Some of you will go on to graduate school in history and politics and English and if so, remember what you learned from Professors Phillips-Fein and Shulman and Gurman, among so many others of my brilliant colleagues: that the only barrier between academics and activism is the one that you impose on yourself. So don’t impose it.

And on and on with you future architects and doctors and designers, remember Professor Remes telling you that as a private individual, you are absolutely powerless to combat neoliberalism or climate change or mass incarceration or any other serious social problem. You have to connect with some form of collective or institutional power.

So seek allies, but not blindly—some people you won’t be able to convince and that is fine. And practice humility, which means knowing that we are all of us individually flawed, that there is always more we don’t know, that there are times to step up, but there are also times to step back, to let others shine, to contribute in other ways your time and talents allow. That is the stuff of movements that last.

Which brings me to the third lesson from that day in January two years ago here in New York: justice, like history, is not linear; it is always in the process of becoming—of being challenged, reversed, or advanced. Perhaps you read Walter Benjamin with Professor Huber. If so you’ll recall his warning that few thoughts are more dangerous than assuming history inevitably or irreversibly moves towards progress, because much as those who struggle for justice learn and innovate in our pursuit, so do our adversaries.

So yes, that day ended in victory, but it was followed by defeats, by new bans, by different outrages, by other struggles. And that is precisely as it should be. It’s why we speak of justice as struggle, as a constant push and pull. It’s what forces us to think in terms of movements, not moments, to remain vigilant and active in the face of reaction.

But seeing justice as process also means taking care of yourself and each other along the way; it means making time for rest, for humor—be sure to find yourself a go-to karaoke song! It means celebrating victories, whether they’re your victories or those of the people around you. It means celebrating this day, then taking up anew the thread of thinking, working, and organizing. It means remembering, as Oscar Wilde wrote, that “a map of the world that does not include Utopia isn’t even worth glancing at, for it leaves out the one country at which Humanity is always landing. And when it does so, it looks out, and, seeing a better country, sets sail”.

This, of course, is precisely what brought you to Gallatin in the first place, even if you didn’t know it then. What links all of you in your vast range of concentrations, the thing I, we, all of us up here are again and again inspired by, is your intellectual restlessness, the seeking of paths that while your own and individualized, can only be accomplished collectively. To that, I urge you to return in moments when dismay threatens to overwhelm: to reconnect with the restlessness that has long set you a-sail.

As you do, keep in mind what Keeanga-Yamahtta Taylor wrote of the historian Howard Zinn, that “all ideas do not carry the same significance, that the level of injustice and inequity in the world requires that we take positions. Those positions should absolutely be rooted in facts, in history. But life is really too short to equivocate. We have to take positions on things and then fight for them.”

Because you are Gallatin students, I know that you will. And it fills me with hope, anticipation, and gratitude.