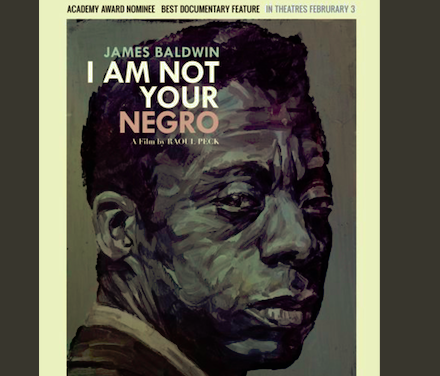 Eve Meltzer, associate professor of Visual Studies at Gallatin, was awarded a 2020-2021 Scholars-in-Residence Fellowship at the Schomburg Center for Research in Black Culture of the New York Public Library to complete the research towards and writing of her book in progress, Not-Me, Mine, Ours: Belonging and Psychic Life After Photography.

“The book argues that the relationship between the psyche and the camera is more intimate and important than we have yet to describe, especially as it pertains to claims of belonging,” says Meltzer. “Each of four chapters treats a film, a work of art, or a group of photographs that illuminates the ways in which scenes of subjection operate photographically both inside us and around us.”

The chapter that Meltzer will work on at the Schomburg, “Psyche Obscura, Camera Lucida: James Baldwin, America, and the Moving Image,” focuses on Raoul Peck’s 2016 documentary, I Am Not Your Negro, which draws on Baldwin’s archive as the basis of much of its material. Since 2017, the Schomburg Center has been home to Baldwin's personal archive, including his letters, essay drafts, unpublished works, personal photographs, and audio recordings. As a Scholar-in-Residence, Meltzer plans to make use of Baldwin’s archive as she completes the writing of this chapter.

“The residency will give me the opportunity to work with Baldwin’s papers and also share work with the other scholars in residence,” says Meltzer. “Being accountable to a group of interlocutors is critical for any project, but to this topic, I believe it is absolutely central.” Meltzer notes that this was also the case when she taught her fall 2019 course, “Race in the Visual Field: James Baldwin, America, and the Moving Image.” “That experience was deeply important to my thinking about how to write about the film.”

That experimental class met for five hours each week, examining Peck’s film as an archive of Baldwin’s work and cinematic traces. Each meeting, the class screened one of the films featured in I Am Not Your Negro; Meltzer and her students ate dinner together; they discussed Baldwin’s writing along with other texts on visuality, psychoanalysis, and critical race theory.

“Teaching a class on race in America as the psychical, intersubjective, and visual phenomenon that Baldwin so lucidly explains it to be required that we face one another as well as ourselves with honesty, most especially about the emotions--anger, fear, guilt, guiltiness, sadness--that shape this topic. Why was I, a white woman, teaching Baldwin to a class of predominantly students of color? How would that dynamic play out? My students wanted and deserved to know this; this required that I endure my own culpability as someone both plagued and privileged with being white. This fact intervened in our conversations; it was not something to try to escape. But, just as Baldwin implores that we ‘look inside’, our encounter with one another as racially marked subjects became something that we all began to watch and learn from, in addition to Peck’s film. I credit the success of the seminar to a very special combination of the bravery and brilliance of my students, our willingness to bear rather than bury discomfort, the amount of time we committed to being together each week, and--of course--to Baldwin. The willingness to show up fully and be accountable in discussions of race that we all brought to my seminar, I will also bring to the Schomburg.”